The voice for the voiceless

THE VOICE FOR THE VOICELESS

Alhamdullilah All Praise to Allah Ta'ala for preserving Revelation for us and appointing Ulama-i-Haqq to guide our understanding of Qur’an and Sunnah. We are not above the Shariah, we are very sinful, we at Darul Emaan make it publicly known we have our own shortcomings. However the sins and infringements we are guilty off, is not in the name of deen nor do we justify it with Quran Sharif and Hadith.

It is out fervent dua that the Almighty protects and preserve our Imaan in Islam. We do not seek to curry favour with any person, organisation or government. This organisation will act as an Umbrella body that will work with Ulama Haqqani (true Ulama), Lawyers and others to do all within our means to Defend Islam, Protect our Masjids and promote the Ahlus Sunnah wal Jama’ah within the Shariah and all legal means possible We believe that the Shias, Qadianies and Agha Khanis are out of the fold of Islam.
MJC/UUCSA/JUSA/Darul Ihsan DO NOT REPRESENT US 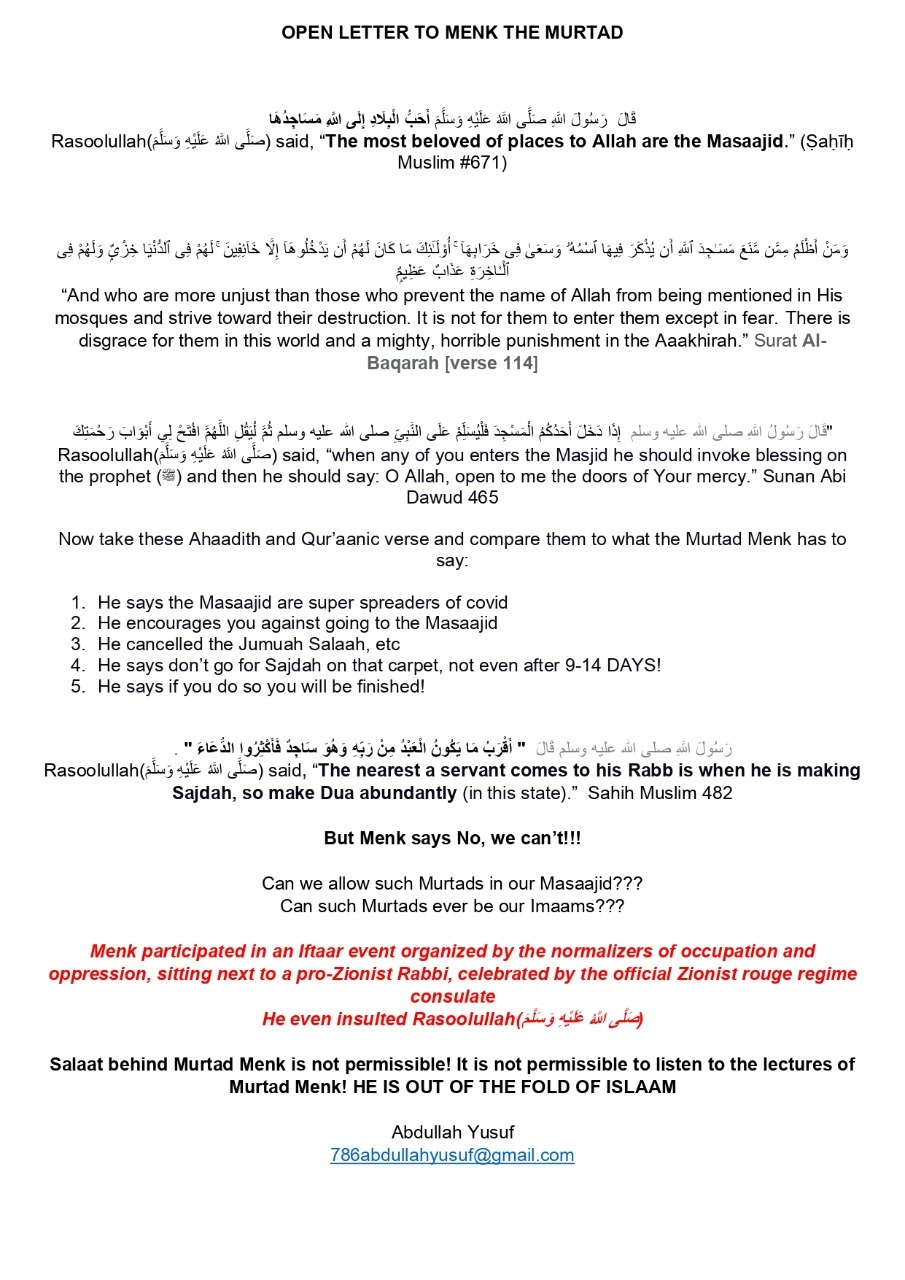 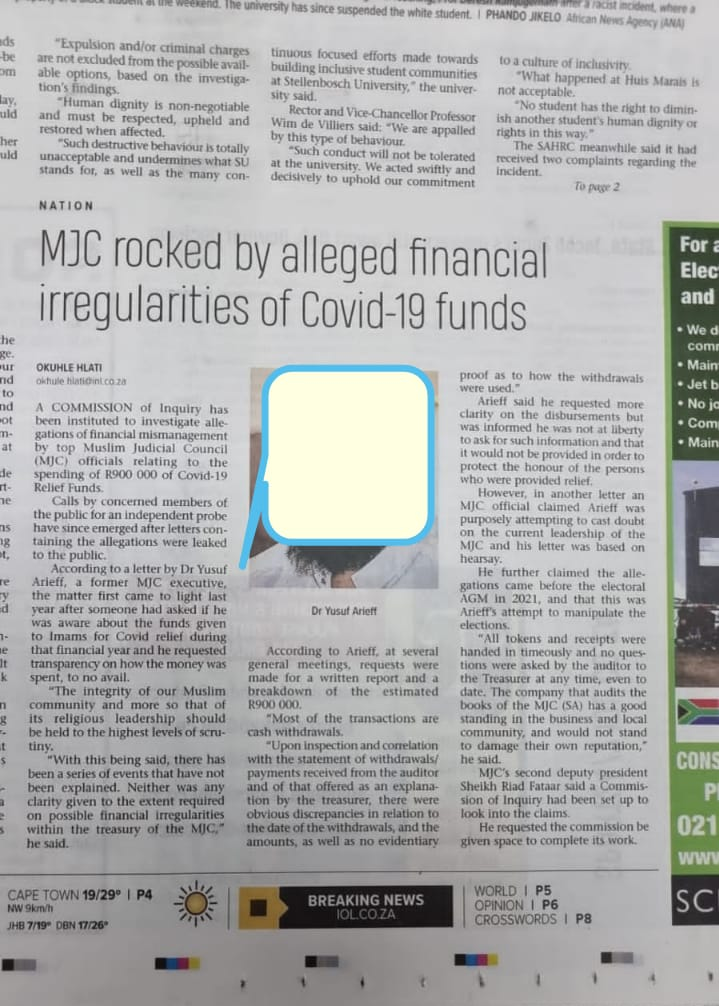 In a Jamiat statement dated 19 April 2022, signed by Ebrahim Bham, a “Written Authority and Mandate” is affixed. Take careful note of the words Insure Group Managers and Epic and read on to discover startling and shocking facts about these fraudsters and conmen involved in the Haraam insurance industry:

I/We authorise IMAGIN8, Insure Group Managers Ltd. or their authorized Third Party (herein after referred to as Epic) to draw against my/our account the contracted value in terms of an authority/mandate from JUSA Lillah to collect and manage monies in respect of Lillah for Jamiatul Ulama South Africa agreement (“Agreement”) for which I/we extend this authority to collect by debit order.

I/We further authorise Epic to increase or reduce such amounts due from, time to time to reflect any change to the Agreement, including changes in the base agreement cost, additional services, products, transactional costs as communicated to Epic by Jamiatul Ulama South Africa.

I/We understand that the withdrawals hereby authorised will be processed through a computerised system provided by the South African banks and I/we also understand that details of each withdrawal will be printed on the bank statement, with the reference prefix “IMAGIN8”.

This authority remains in force until cancelled in writing by me/us.

The individual debit and/or payment instructions so authorised to be issued must be issued and delivered as follows:

In the event that the payment day falls on a Sunday, or recognised South African Public holiday, the debit day will automatically be the preceding ordinary business day.

I/We further autorise Epic to deposit directly into the above account any amount which may be due to me/us in respect of any refund amounts.

I/We shall not be entitlred to any refund amounts which Epic has withdrawn while this authority was in force, if such amounts were legally due."

This is who the Insure Group Managers are:

The exact nature of the alleged crimes perpetrated at Insure Group Managers when its directors misappropriated R1.7-bn in premium funds — from which it bought wonky assets and paid about R160-million in dividends to owners Charl Cilliers and Diane Burns — has been detailed in a reportable irregularities report and several affidavits submitted to the Hawks

"And led to the dramatis personae – Charl Cilliers and Diane Burns, directors of Insure Group Managers – being debarred as financial service providers, based on their lack of honesty and integrity.

Both Cilliers and Burns deny all culpability for what happened. But the facts paint a different picture. The story here is that Insure Group Managers, an intermediary which collected insurance premiums from customers, which it was meant to pay over to the insurance companies, instead secretly invested that cash in its own very illiquid, high-risk and ultimately loss-making assets."

Beware of your Lillah funds being misappropriated

And co-operate in righteousness and piety, and do not co-operate in sin and transgression. And fear Allah; indeed, Allah is severe in punishment."
Surah Maa-idah #2

(1) Now we have the proposed NHA amendments. How come there are no public objections from UUCSA, JUSA, MJC and Darul Ihsan? You have delegitimized yourself! You claim to offer guidance to the Muslims of South Africa but you are silent!!!

Mr Yusuf Patel. It is about time you answer! Otherwise, you will always be referred to as Yusuf Patel Kalbi!

It seems all of you are bought off by the African National Corruption (ANC) government! What other reason can there be for your silence???

The letter regarding the MJC is attached. There’s corruption going on within the MJC as well! When are you’ll going to be accountable for all this money?

(2) As Ulama, Muftis and Imaams, can you’ll please give guidance to the Ummah regarding the following personalities whom we consider to be Murtads: MBS, Menk and Ebrahim Rasool. What are the Fatwas of MJC, UUCSA, JUSA and Darul Ihsaan??? Please make your fatwas public regarding all of them.

(3) How come none of you is prepared to make a public statement regarding the Shias???

Why can’t Radio Islaam also known as Radio Shaytaan also make a public announcement regarding the Shias??? Haider and Sulaymaan Ravat are also responsible for this mess!!! You’ll become so corrupted that you’ll can’t speak!!!

Why can’t ITV and Zaheer Ragie also speak regarding the Shias??? Zaheer Ragie, are you also another scholar for dollar who has sold the Deen???

Sulaymaan Mulla, why don’t you speak? You claim to be an ambassador of Islaam but you are selling out Islaam!!! You don’t listen to your teachers and appear on TV!!!

(5) You went to court to change the laws of Nikaah and Talaaq and you joined the lesbians!!!

(6) When are you’ll going to criticize the current government (African National Crooks/Corruption (ANC), Desperate/Defeated Alliance (DA) and Economic Free dumb Fighters (EFF)) for bringing the country to its knees in every sphere of life???

People are suffering everywhere, and you are supporting this corrupt government!!!

Did not Nabi Alayhis Salaam prohibit us, does the Qur’aan not prohibit us from this???

And do not aid each other in sin and transgression. Qur'an 5:2

You, AK Allie, Irfaan Abrahams and Igsan Taliep, went to the South African leaders, are you’ll captured Ulama? Why don’t you’ll just say that you’ll are no longer representing the Ummah, you’ll represent the government and you’ll are the puppets of the government!!!

(7) What guidance are you’ll giving the Ummah regarding Israel, UAE and Saudi Arabia?

Why don’t you’ll criticize the Saudi regime??? Are you’ll worried about your visas, touring and gifts from the Saudi government? What do you have to say regarding the cinemas that MBS built in Madina and other parts of Saudi Arabia?

(8) What do you have to say about the promotion of the Satanic so-called Abrahamic faith in Arabia?

Our Ulama are prepared to debate with any one of you live on the radio.

The public are encouraged to convey this message.

We had certainly brought you the truth, but most of you detest the truth. Qur'an 43:78

"Israeli Jewish extremists are promoting financial rewards to those who carry out extremist provocations on the courtyards of Al-Aqsa, desecrating the mosque during Ramadan. Rewards include 10,000 shekels for the doing Passover sacrifice there."
Quds News Network

The majority of South Africans have still not submitted their comments on the National Health Act’s Draft Regulations which will effectively act as a long-term replacement to South Africa’s State of Disaster Covid Regulations. The number of submissions so far are very few.

This insane Act will affect every South African as some of our Constitutional rights including our religious freedom will be taken away from us forever.

The National Health Act’s Draft Regulations must be stopped!

Your future and your children's future are at stake. Yes we must pray but now is the time to ACT. If you have not submitted your comments on the draft National Health Act, please click on the link below NOW and share with others.

This booklet has been compiled by a group of Ulama (ulama-e-ummati) in response to a question asked with sincerity.

Readers are humbly requested to forwarded it to as many groups and and people as possible. To stand up for the Haq is an extremely great Ibaadah especially during this great month of Ramadaan . May Allah Ta'aala accept everyone's effort to protect His Deen. Ameen

Copy and paste the following into an Email

OBJECTION AGAINST THE HEALTH AMENDMENTS

2. The Policy itself is contrary to Section 26 of the Protection of Personal Information Act, which prohibits the processing of personal information concerning, amongst others, religious beliefs and/ or health information of an individual.
3. I also object to continuation of the Disaster Management Act, which has long since been an over reach of power by this government, the disaster has never been substantiated and any continuance of the DMA is a clear grab for total control over citizens' lives.


We Thank Almighty Allah and Praise Almighty Allah.
We Send Salawaat and Salaam Upon Nabiﷺ.
With The Mercy of Allah Taala We Have Completed Daily Naseeha 2200.
Naseeha 1 - 2200

Allahummajalna Minal Maqbooleen O Allah, Make Us from those Whom You Accept. 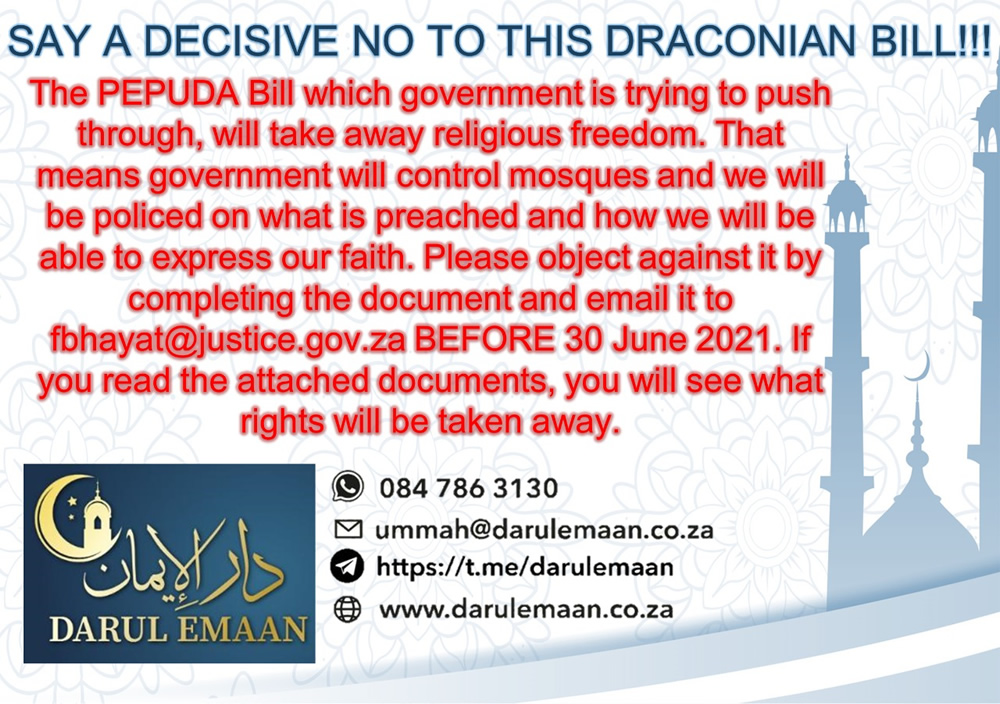 We Thank Almighty Allah and Praise Almighty Allah.
We Send Salawaat and Salaam Upon Nabiﷺ.
With The Mercy of Allah Taala We Have Completed Daily Naseeha 2000.
Naseeha 1 - 2000

Allahummajalna Minal Maqbooleen
O Allah, Make Us from those Whom You Accept. 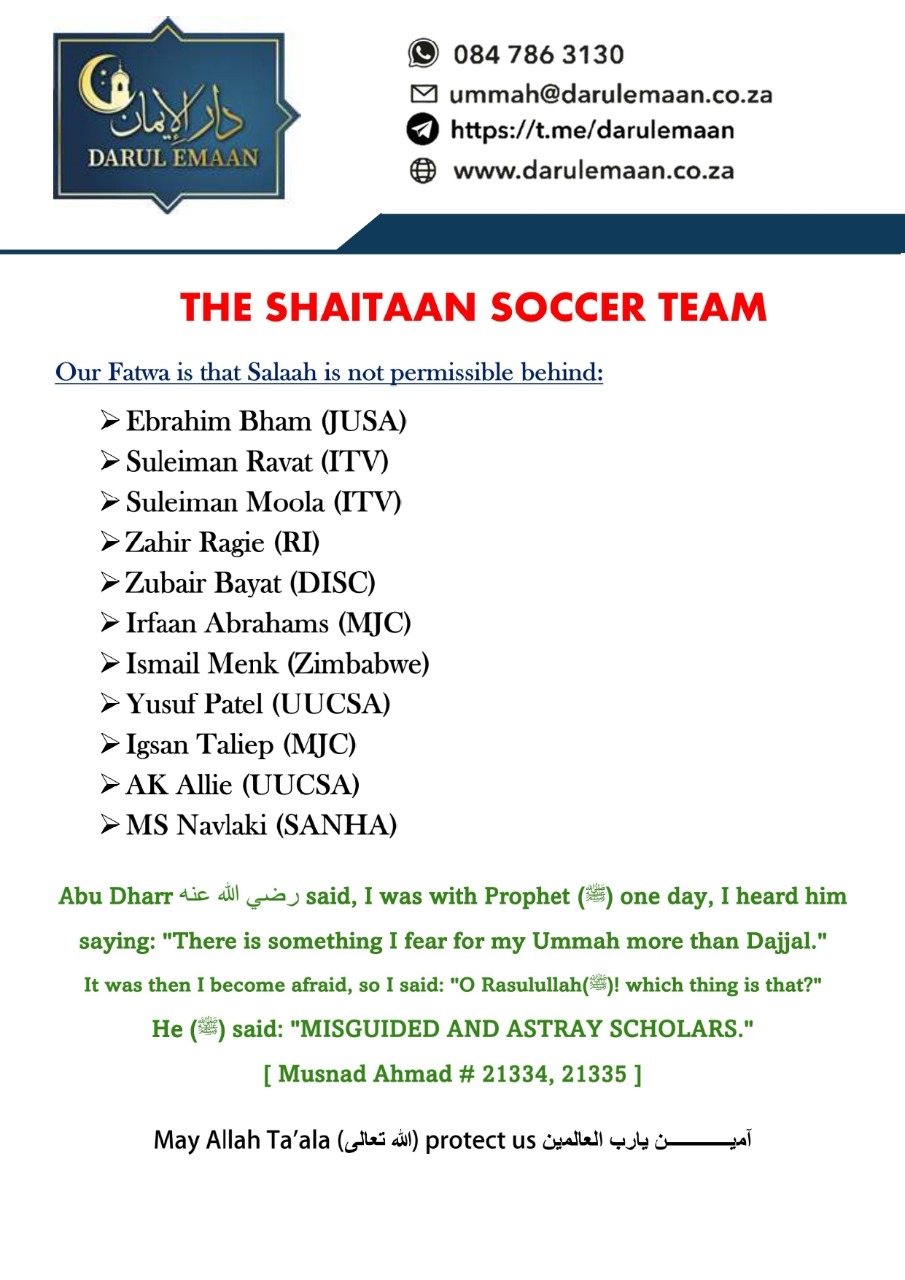 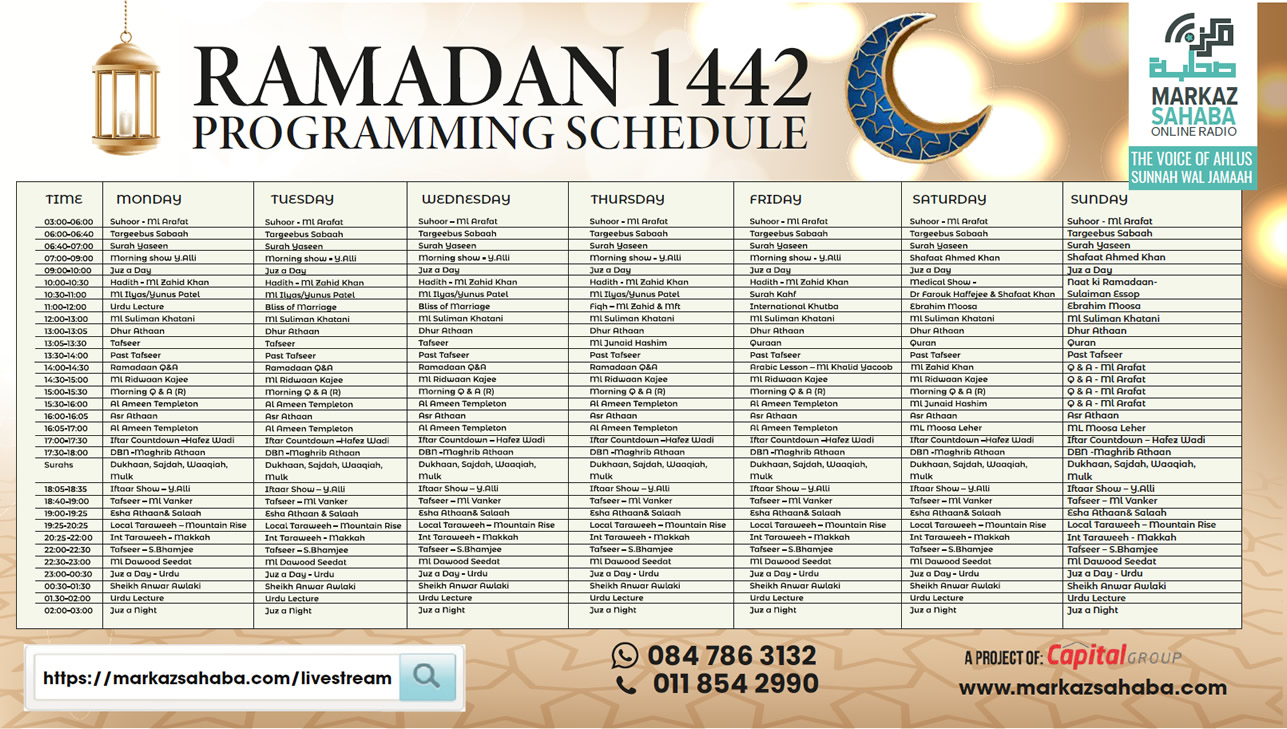 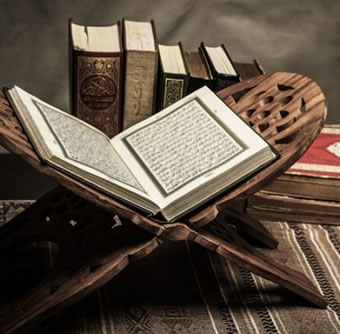 Q and A Mufti AK 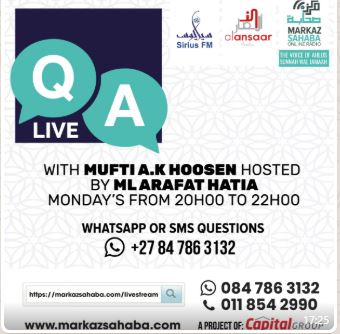 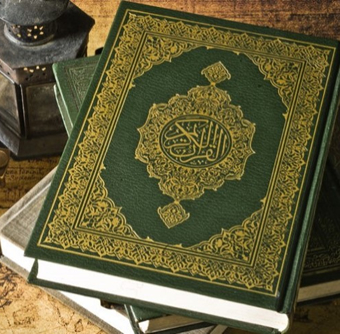 Custodians of the Haq 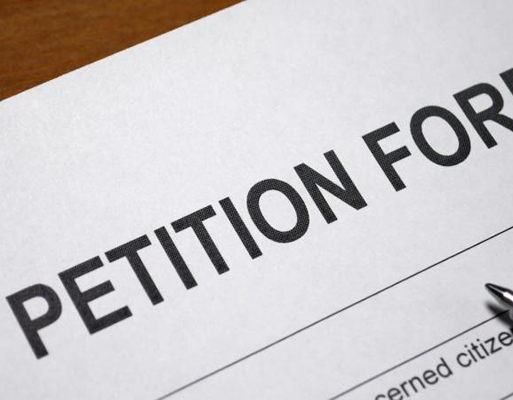 A call to the Ulama and Public of South Africa

As country after country begin to toe the line in the gradual attempt to corrode the roles that are set by Allah and to indoctrinate the masses to accept the creed of modernism, LGBT and feminism, the trajectory that is being noticed is that influential scholars are being recruited to further these agendas under the banner and pretext of "tolerance ", "unity" and the false pretext of giving in to government pressure in order to protect Muslim interests... 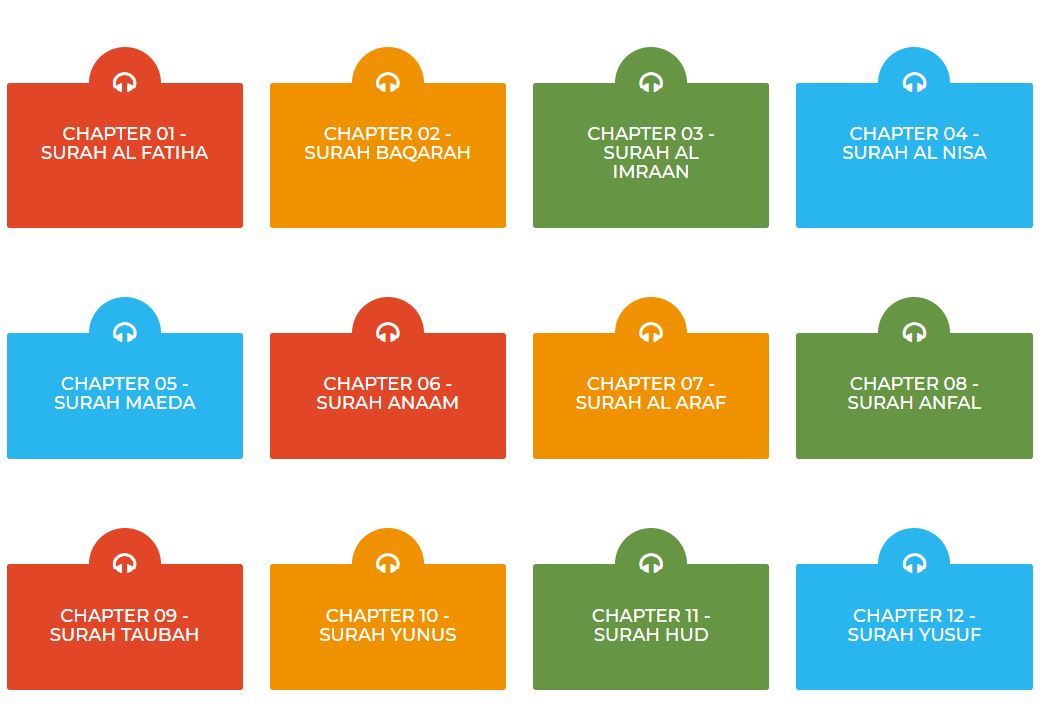 You can change an orphan’s

Our $7.5 million campaign is designed to empower international leaders to intervene on behalf of the 8 million orphans living in institutions around the world. Through this historic campaign, we’re working to advocates for millions of orphans and ensure thousands of children receive holistic care and a path to independence and family.